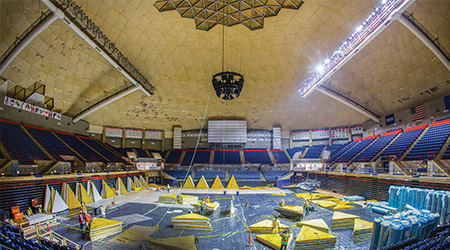 The challenging roof repair project at the University of Connecticut’s Harry A. Gampel Pavilion had to be completed on a tight schedule — between commencement in May and the start of basketball season in October.

“The (dome’s) interior has a fabric panel that is visible from inside the bowl,” says Evan Feinglass, who is the university’s associate director of athletics with facilities management and planning. “It was starting to get dry and brittle, and the interior fabric visible to the eye when you’re sitting in the venue was starting to become brittle and crack and peel away. It really started to accelerate over the last couple of years.”

The decision to address the dome’s condition launched Feinglass and his department into a series of challenging decisions that offer lessons in project management, scheduling and resourcefulness.

Dome in the spotlight

The University of Connecticut built the 10,000-seat Gampel Pavilion in 1990, and in addition to women’s basketball, the 250,000 square-foot building has hosted men’s basketball and women’s volleyball games, as well as special events, including commencement and concerts.

The domed roof, which rises to 130 feet above the court, consists of a network of 2,100 metal-clad panels with a fabric-wrapped insulated cover on the interior. Over the years, the fabric wrap had torn and flaked, and the exterior sealant was wearing off, causing leaks to become more common.

“There had been a variety of roof leaks that typically developed in the winter months from snow and ice peeling away and damaging the exterior structure and causing some leaks,” says John Robitaille, the university’s senior project manager with planning, design and construction. “Those typically were repaired from the exterior side to stop water infiltration.

“The (dome’s) fabric panels aged over their 25 years, and the plasticizers within the fabric basically dried up and began to peel away and fall down into the seating bowl and the court below. The major thrust for the need to repair this was the interior degradation of the insulated fabric panels that wraps each one of the triangular units.”

The decision to address the dome’s condition arose from several factors, including attention from some high-profile campus figures.

“It certainly helped that we had a president and a board of trustees that noticed it, as well,” says Feinglass, whose department oversees facility operations, grounds and game operations in buildings with a total of 621,000 square feet. “That helped push things forward. We’d been looking at it, and I’d been living it working with John trying to figure out, one, how do you even get up there to fix it? Then two, once you get up there, how do you fix it?”