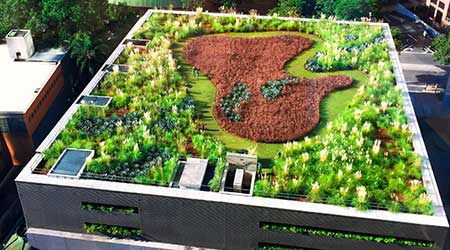 No area of institutional and commercial facilities has escaped intense scrutiny related to the possibility of improving an organization’s sustainability. From irrigation systems and HVAC systems to windows and plumbing systems, managers have scoured equipment and components for water conservation and energy efficiency improvements. Even roofs have not escaped scrutiny.

New York City building owners and managers are paying close attention to local laws 92 and 94, which went into effect Nov. 15, 2019, according to Smart Cities Dive. They target a vast, often overlooked and underused resource in New York: roofs.

Known informally as the Sustainable Roof Laws, the laws require most new buildings and buildings undergoing major roof reconstruction to include a sustainable roofing zone on 100% of the available roof space.

Sustainable roofing zones are defined as “areas of a roof assembly where a solar photovoltaic electricity generating system, a green roof system, or a combination thereof, is installed.” In other words, the roofs must have a solar panel array, green roof or both.

“The goal (of the laws) is to make sustainable roofs just one of the parts of how you put a good building together,” says Mark Chambers, director of the Mayor’s Office of Sustainability.

Sustainable roofs are far from the norm in New York. According to a mapping project from The Nature Conservancy, there were only about 730 green roofs out of over 1 million rooftops in New York City in 2016.

Read next on FacilitiesNet